A story of marmalade and a tale of two trees

Remembering the weeks running up to March 2011, when the streets of the city were filling with uncertainty and conflict, Rose and Louisa (two of Hands Up’s founders) spent their time making marmalade. This and the house in the old city provided a sticky orange-scented refuge from the turmoil outside and the thought of having to leave.

There are two trees of note in Beit Louisa, Bab Salaam, Damascus; they lurch almost out of the wall into a leafy umbrella that stretches out and down over the flagstones and above the fountain. One is an orange tree, the fruits appear in December and turn their expected colour as the days pass, by March they are round, juicy and ripe. But these are no ordinary oranges; they are Narenj, or bitter oranges. Bigger and sharper than their sweeter cousins, although the taste packs a punch that would grace any table or jar. Sometimes at night we wake up to a noise, somewhere between a thud and a splat; the impact of Narenj flesh hitting stone and splitting open. Orange toes walk back from the bathroom the following day.

In early April the blossom appears, small white flowers sit prettily amongst the green and orange. With these flowers come the bees, and with the mix of sunshine, oranges, blossom and buzzing the Beit becomes alive and saturated with the scent. In just a few weeks the blossoms twirl to the ground and carpet the flagstones; drying in the sun they turn brown – whoever thought of baking blossom? But sun-baked blossom is a powerful thing and hits you like a wave when the door opens from the street into the courtyard. The scent of orange blossom, are we home then? 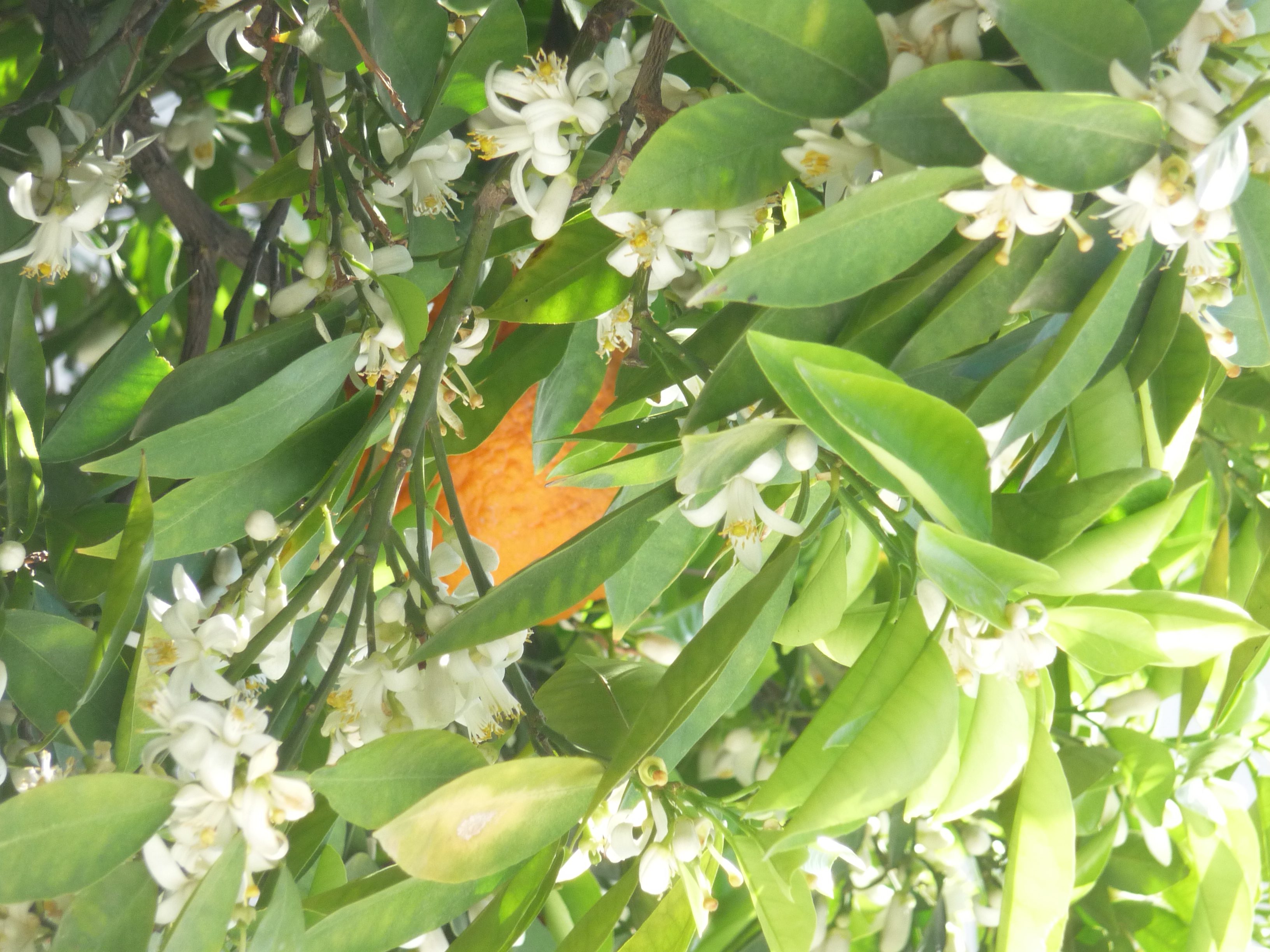 Next to the orange tree is a slightly larger trunk, the branches reach further and the fruits grow bigger, greener and longer – they are oval in shape like a squarer version of a rugby ball. Delicate they are not. They hang just out of reach – unless you take a flying leap off the fountain. If you hit it at the right angle you might land with an ugly prize in your hands. The skin of the fruit is green, thick, tough and porous. Alternatively you can jump up from the fountain’s edge and head-butt the nearest until your forehead smells of citrus. It won’t fall and will barely dent, delicate they are not, but this is because they are Kebad or Ugli Fruit.

When the ‘thud-splat’ from the Narenj tree starts sounding regularly, four or five times a night, then you know the oranges are ripe and there will be a glut of the things. Some are more stubborn and sit high up in their branches, mocking you, but even the most unwilling oranges can be reached with the right implement. A broom handle and a tiptoe stretch out of the kitchen balcony window can usually persuade these hold-fasts that it is indeed time to fall. Now what to do with them all?

Any hapless wanderer who turns up for one reason or another must also make marmalade if they come at this time. Hand them a knife, a chopping board, or any surface available to work with.

Cut the rind from the flesh please;

Make it thin, not chunky thank you;

Juice, flesh and pips in this bowl please and rind in that pan, no that pan;

Shall we have some whiskey while we work?

Muslin, hair bobbles, pairs of tights cobble together to make the small pouches of pectin-filled pips which are the key; nobody wants a marmalade too runny.  At night time the glow of gas on the stove flickers underneath the biggest pot we have. Orange rind, water and sugar bubble away, reducing reducing. The bright crescents of orange peel dull and soften, coated and caramelised by the sugar but the citrus bite remains. Saucers sit in the fridge with small pools of the sticky liquid, sometimes forgotten about while we return to chopping and slicing or perhaps to tugging a Kebad fruit from its tree (A few slithers of Kebad rind adds a spiky twist to the marmalade of Bab Salaam and makes this particular batch one to remember). Later we open the fridge and see 4 or 5 fried eggs dotted amongst the shelves: all marmalade yolk on a saucer of white. There is a reason these small plates of orange are waiting in there and behind it lies one of the ultimate questions for a marmalade maker (another surely being whether you like it thick or thin), will the jam set? The acid test is the wrinkle on the skin that forms – or not – on the top of the marmalade pool when you press it gently. These are good wrinkles and not to be frowned at.

If the wrinkle is right, the marmalade set then the cows are home, the fat lady has sung and all is well. Another burst of activity follows; every jar in the Beit is gathered, scoured and matched to a lid of some sort. Material ones with elastic bands, old lids from jams, honeys and chutneys. Small circles of film to top the marmalade before the lid does. Steam fills the jars as the hot liquid orange is ladled in.  Two shelves in the sitting room groan under the filled pots; some tall and rounded, others straight and some slim. The Narenj and Kebad trees have done their work and so have we. We sit with sticky orange fingers looking at our handiwork. The marks of contented marmalade makers are plain to see; pieces of orange peel in our hair and a small trail of marmalade smeared across a cheek or a brow. Shareef, the tortoise, noses some orange pips, escaped to the floor. There is toast on the table and an open pot of fresh marmalade just broken into.