Q&A with our Trustees: Louisa

In a new series of blogs across the year we’re conducting, Hands Up have decided to question our Trustees to share and get to know them better. In this first post, we caught up with Louisa, co-founder of Hands Up Foundation, and decided to ask the nitty gritty about her involvement. Read below to find out more!

What is your role within the Hands Up Foundation trustees?

Alongside taking part in our quarterly board meetings, I’m on the projects committee at Hands Up which means I get involved in how and where the funds that Hands Up raises get spent. Every year Hands Up’s CEO organises a trip to see our partners on the Turkish-Syrian border and more recently Lebanon. It’s been a privilege to be part of these trips for the last few years – we always return feeling inspired about the impact of the projects and galvanised to keep fundraising. Fundraising is a big part of what all the trustees have to think about.

How/why did you get involved in the Hands Up Foundation?

It was, and is, my Syrians friends – Tereiza, Renee and Mohammed for their hospitality, generosity of spirit and humour that was my inspiration. I first went to Damascus for my year out from university in 2007 – I studied Arabic for my undergraduate degree. I went back to Damascus after I graduated and worked there from 2009 to 2011. Those few years were such happy years – like so many other people who visit Damascus, the experience and the friends I made left a deep impression. When the conflict began and I returned to London, I needed to do something. Johnnie, Rose and I held a supper club at our house in July 2012, tried our best to cook some Syrian dishes, with the aim of raising some money to send to my Syrian friend, Tereiza. Her sister had been injured by a piece of shrapnel and we wanted to contribute towards her medical bills. The supper clubs continued every month over the next few years, and in April 2014 we decided to register officially as a charity.

What aspect of the Hands Up Foundation trustee work do think is most important?

Overseeing our project work to make sure that the funds are used is the most effective way to benefit the Syrians most in need. Rose spends a huge amount of her time doing this and has very close relationships with our partners. Equally, a key part of the role of a trustee is to act as a sounding board for Rose. We have to support her and the team as they implement the fundraising strategy so we hit the targets needed to continue to fund our projects in a sustainable way.

What have you learnt from setting up a charity/being involved in the board? – any tips?

That it is crucial to have a mix of people on the board who bring along different skills and experiences – fundraising, programming, governance, financial management and legal. The board needs to meet regularly and has to be prepared to put in the time – like any start up, there’s a lot of heavy lifting. Thankfully Hands Up’s board is very hands on and involved.

How often do you get to use your Arabic for the Hands Up Foundation and how does that help?

I use my Arabic whenever I have the excuse. For the last couple of years, I’ve gone to Turkey and Lebanon to visit our partners, and this is a wonderful chance to speak as much as possible. I helped translate some of the interviews for the short video we made on the prosthetic limb clinic in Reyhanli that Hands Up funded. This was hard (not only the translation part!) but the full interviews were heart rending personal stories from Syrians such as Rayan who have suffered so much. Rayan was 9 when she lost one of her legs in a car bomb in Syria. A year ago, her parents carried her to Turkey for prosthetics treatment at the Clinic supported by Hands Up on the Syrian Turkish border. As you can see in the video here, she is determined to become an engineer and says her prosthetic legs have changed her life.

Where do you believe the Hands Up Foundation makes the most difference?

Supporting Syrians in some of the harder to reach areas. We’ve supported a team of doctors at SAMS for the last few years in north west Syria and I’m delighted that we can continue to do this, even as the situation changes on the ground.

What are the challenges facing the Hands Up Foundation in the next year – both here and in Syria?

Continuing to keep our donors engaged while Syria no longer makes the headlines. The needs are still vast and the impact of the conflict will be felt for years.

Does being a Board member help in any way in other areas of your life?

Absolutely. I’ve learnt a huge amount from the other board members, our CEO and partners, especially about working in an extremely tough operating environment – how to balance risks with needs, and how essential it is to have expert advice and input.

What are you most proud of being a part of the Hands Up Foundation?

Seeing the impact of our projects on the ground, and knowing how far the funds we raise go.

Finally, what three words would you use to describe the Hands Up Foundation? 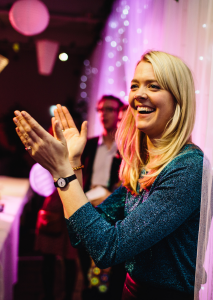