Update from Melie Pemberton our teacher on the ground in Lebanon

Hands Up’s new regular blogger, Melie Pemberton, a teacher currently living in Beirut, has sent us an update on her life out there. This time we learn about charades with language barriers, the effect of displacement, and the simple joy of day trips and laughter that can provide a new perspective on life.

This is about one of my favourite people I have met since being in Lebanon; my great friend Ibtisam, whose name I only mastered after discovering there is no ‘p’ in the Arabic alphabet (not Iptisam as I had been calling her). What has struck me most about our friendship, is how one can build such strong relationships with such limited common language. A lot of charades and smiles have been essential, although at times this has proven a risky strategy. Whilst attempting to practise new vocabulary, I ended up acting out a pig. Somehow, perhaps a sign of my truancy from drama classes, this led to her thinking I was calling her a pig, which, as a Muslim, could not be more insulting!

After numerous hugs and a few chocolate bars, all was forgiven. That was until I asked Ibtisam the word for bum. She willing gave it to me and I mischievously went round pointing at my bum saying it to anyone who would listen. I was getting some slightly odd looks, but mainly just smiles, until one of the teachers laughed so hard that I was slightly taken aback. When I enquired, he revealed to me that Ibtisam had in fact given me the word for fart! It took more than hugs and chocolate bars to redeem that one!

As with many Syrian people in Lebanon, Ibtisam has an incredibly sad and difficult story. Having managed to flee Syria with her husband and four children they settled here in Lebanon. After about 3 years, her husband headed back to Syria to see his sick mother. Tragically, he has never been seen or heard from again, leaving Ibtisam to raise the four children alone. In an extremely patriarchal society this is particularly challenging. Ibtisam now has to get permission from her uncle to come and visit us in Beirut; permission that is yet to be granted. This has been incredibly hard and the whole family has been affected in different ways; the eldest son distanced himself from the family, the youngest stopped talking and stopped attending class and Ibtisam is suffering from depression.

Ibtisam and I decided to take her children to the beach for the day. It was a beautiful, sunny day with the children were leaping into the sea every few minutes for the entire day! A new discovery for me, after a number of close calls, was the realisation that a considerable amount of skill is required to teach children how to swim. Ibtisam was also quite shocked when we threw her in the sea fully clothed. Once she had chocked up all the sea water, she began laughing hysterically; a scene I will never forget. We have since done a number of similar trips and there has been a transformation in the behaviour of the youngest son; he has started talking, going to class everyday and his confidence has grown tremendously (enough to pour a whole glass of water on my head in the classroom).

From this experience, among other things, I have seen the power of the outdoors and its ability to help people feel normal again and have joy in their lives even under the most difficult of circumstances! 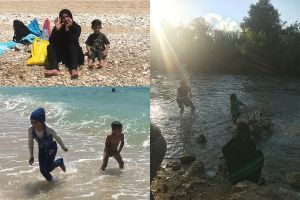